How to Learn from Failure in 10 Steps

Telling the recently failed that there are lessons to be learned from getting it wrong is insensitive and cruel.

Failure is hard. Failure hurts. It stings the soul. It leaves us feeling weak and powerless. It diminishes our self-worth, our intrinsic motivation, and our courage. We need time to rebuild and to heal. We don’t need someone, however well-meaning, to tell us that we will be better for it in the long run.

Failure changes who we are. Not just in the days following, but for a long time afterward – often permanently. Our failures are branching points: they make us who we are by providing new paths for growth. And they become a permanent reminder of a time where growth was severed.

As hard as failure is to bear, we can indeed learn from it. We need to give ourselves time to heal and to reflect, but we can, eventually, move forward and be better for our failures.

There are numerous ‘motivational’ stories told of famous sporting heroes, blue-chip companies, movie stars, and other famous types who used failure as a spur towards ultimate success. But these are mostly thinly disguised examples of survivorship bias: they are actually focused on success. They don’t address failure and the lessons we can learn from it so much as they focus on success (despite failure). And who needs successful people reminding us of how badly we’ve failed anyway?

This reminds me very much of the case of the planes which returned from bombing forays in World War II, and the engineers who focused on reinforcing the heavily hit parts of the plane to try and make sure that more of them survived. What they should have done was to focus on those that did not make it and try to look at where they needed reinforcement. They needed to study the failures more closely. The reinforcements needed to prevent failure are so often in exactly the opposite places we target for success. 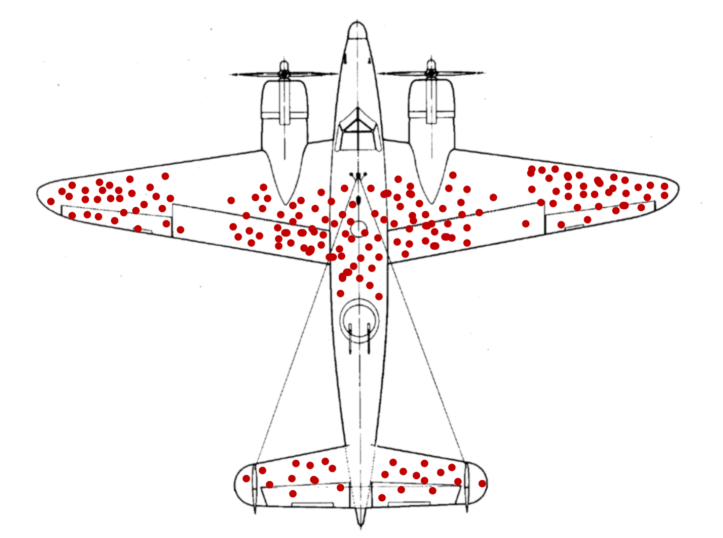 Failure so often forces us to relive the moment of failure. We run through our failures in seemingly never-ending loops, often imagining what we should have said or done to avoid this failure. This purgatory of what the French call l’esprit de l’escalier torments us repeatedly – until, one day, it doesn’t.

So how do we go about learning from failure? People always say we need to learn from our mistakes. But how? Here are a few suggestions:

HOW TO LEARN FROM FAILURE

Firstly, we need a sense of scale. There are different types of failures and we should not conflate them.

There are the small mistakes we make in trying something new, in experimenting, in trying to figure things out. There are small mistakes that really don’t mean much at all – and which give us direct feedback that we can learn from almost painlessly. They seldom affect anyone but ourselves.

And then there are the big, sometimes costly mistakes which so often have wider effects.

The first step, then, in learning from mistakes is to learn not to conflate the two types of failure. Small mistakes with limited effects are not the same thing as big mistakes. We actually want to embrace the former, while avoiding the latter. In fact, making many smaller mistakes can often lead us to make fewer big ones.

2. NOT ALL FAILURES ARE FAILURES

Quitting when the time is right isn’t a failure. We may need to make our peace with it, but getting out while you can is sometimes exactly the right thing to do. Says Seth Godin:

Winners quit all the time. They just quit the right stuff at the right time.

And remember, sometimes a mistake can be a happy accident. Says Bob Ross:

“We don’t make mistakes. We just have happy accidents.”

And, of course, sometimes what we see as failures now become lucky escapes later.

We need to give it time. We need to be kind to ourselves and allow the immediate pain of failure to fade.

Let’s be honest: We are often to blame for our own failures. But, just as often, others are too. We might not be entirely to blame. There are team failures, failures of leadership, and systemic failures which may be at the root of our own failures.

Yes, we do need to accept our responsibility for what went wrong – or at least own our part in it, but it is seldom solely our actions or inactions alone which led to mistakes being made.

If it is entirely our fault, let’s not look for a scapegoat.

The biggest part of learning from failure is to diagnose exactly what went wrong and why. Once we are a little further from the moment of failure, we need to narrow down the causes of that failure.

Once we strip away the emotion, we can start to look at fundamental causes. These causes should be more about the ‘what’ and the ‘how’ than ‘who’.

Once we think we have identified the causes of our failure, we need to look even more deeply to see if these are truly the original causes, or if they are actually the effects of a deeper cause.

We may actually have failed before we failed. Picture the case of a student who fails a test. It may well be because they didn’t study. But it is more likely that there is a reason or reasons why they didn’t study in the first place. We need to get back to first principles to truly learn from our mistakes – so often the failure we see is not where the failure happened.

Once we have a clearer idea of what went wrong, we need to devise a strategy to fix our mistakes – or at least to avoid making similar mistakes in the future. This becomes a moment of pattern recognition – very much like a chess position: we see a situation similar to the one we’ve seen before, we know we got it wrong last time, we try our new strategy.

We always need to retain a memory of our failures, no matter how dimly.

This does not mean that we should obsess about these mistakes. Quite the opposite. But forgetting our mistakes entirely can lead to us making the same mistake again. Failure to learn from failure is very likely the worst kind of failure. But remembering our mistakes in a more detached way can help us to avoid them and make better decisions in the future when similar scenarios occur.

Often, we will need help from others to learn from our mistakes. It’s not easy to learn from fallibility, and having a supportive friend or colleague or some form of counselor can help us to dissect, study, learn from, and then file away our failures.

Finally, we need to act. We need to put our failures aside and move on. Obsessing about our failures is yet another failure. It is a failure of perspective. We cannot live life being afraid to fail.

Failure is one of the key things that makes us human. No matter how much we want to be perfect, we are not. Nor should we want to be.

Failure is a test of our own humanity. In recognizing and accepting our own fallibility, it is also essential that we recognize that other people make mistakes. We need to forgive them, and we need to give them the time and support they need to learn from them.

Follow Ideas Out There on WordPress.com
Join 6,011 other followers